Despite working both days I managed to sneak in another pre-Thanksgiving, Thanksgiving celebration.  My first Turduckenfest was a site to be seen!  One fully stuffed turducken, multiple boneless stuffed chickens, quails wrapped in bacon, and every classic side dish were lined up for the festivities. 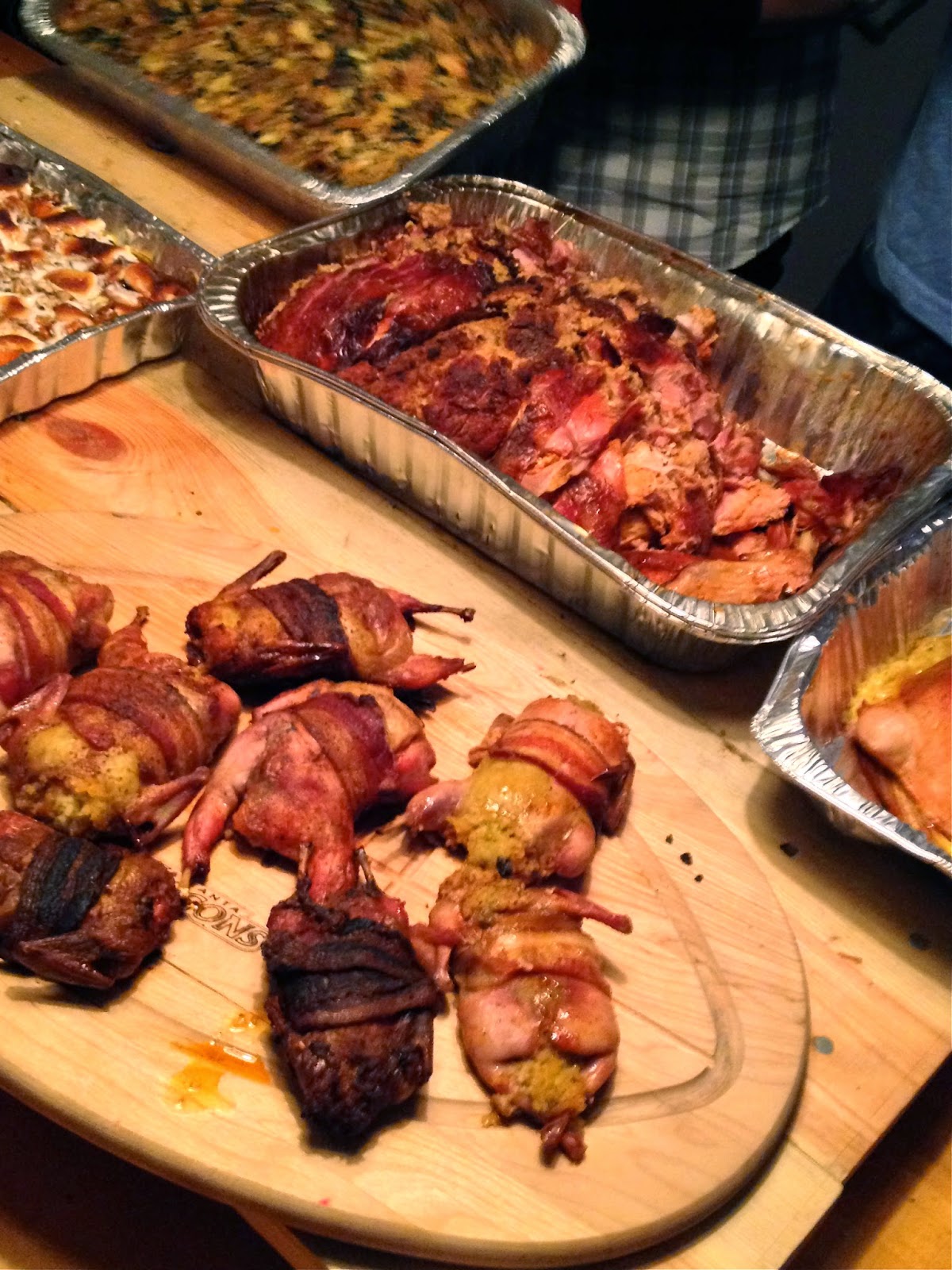 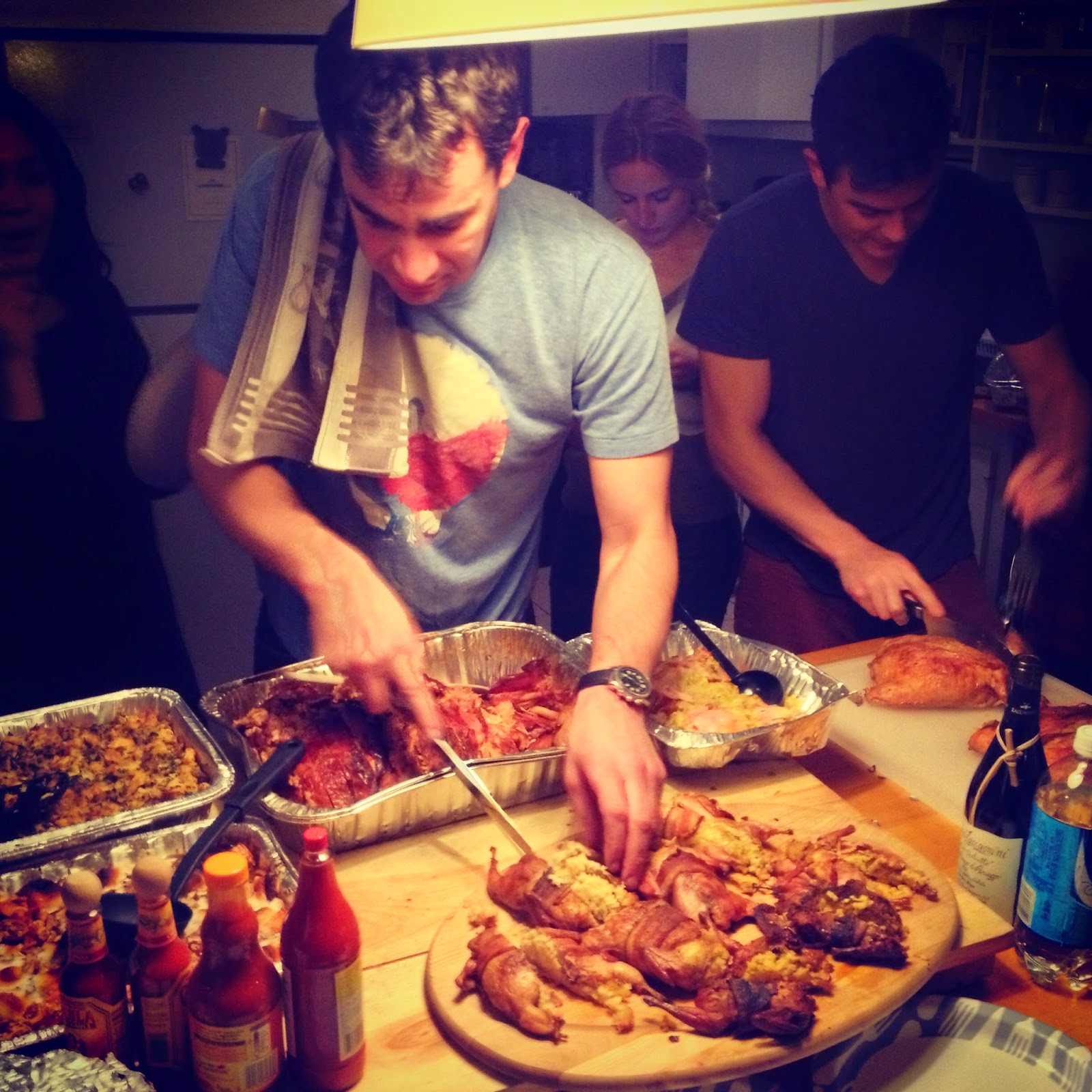 I contributed two dishes, recipes below if you need some last minute additions to your Thanksgiving menu, both were a huge hit!
Bourbon Bacon Whipped Sweet Potatoes with Brown Butter and Crispy Sage
*Slightly adapted from How Sweet Eats
Ingredients:
4 pounds sweet potatoes, peeled and
cut into 1 1/2-inch chunks
4 slices thick-cut bacon, chopped
15 to 20 sage leaves
1/2 tablespoon unsalted butter
1/3 cup milk
4 tablespoons brown butter
2 tablespoons bourbon (I subbed
maple syrup)
1/4 teaspoon salt
1/4 teaspoon pepper
Directions:
Add the potato chunks to a large
pot and cover with cold water. Bring the potatoes to a boil and cook until they
are fork tender, about 20 to 30 minutes. While the potatoes are boiling, heat a
large skillet over medium-low heat and add the chopped bacon.
Remove the bacon and place it on a
paper towel to drain. Remove about 1 tablespoon of bacon fat from the skillet
and set it aside in a bowl. To the same skillet, add the ½ tablespoon butter
and heat it over medium heat. Add the sage leaves and cook until they are
crispy, about 1 to 2 minutes per side. Remove them with a slotted spoon and
place on a paper towel to drain.
Once potatoes are done drain and
add back to pot.  Mash them with a fork
or potato masher, then use a whisk or electric hand mixer to whip them. Once
whipped, add in the reserved bacon fat, the milk, the bourbon (or maple syrup)
and the brown butter. Whip the potatoes again until everything is combined.
Taste the potatoes and add the salt and pepper, seasoning more or less if
desired.
If serving the potatoes
immediately, spread them in a dish and top them with the crispy bacon. Crumble
the sage on top. If you’re waiting a bit to serve them, heat the oven to 325
degrees F and top the potatoes with the bacon. Bake them for 25 to 30 minutes,
then remove them from the oven and crumble the sage over top. 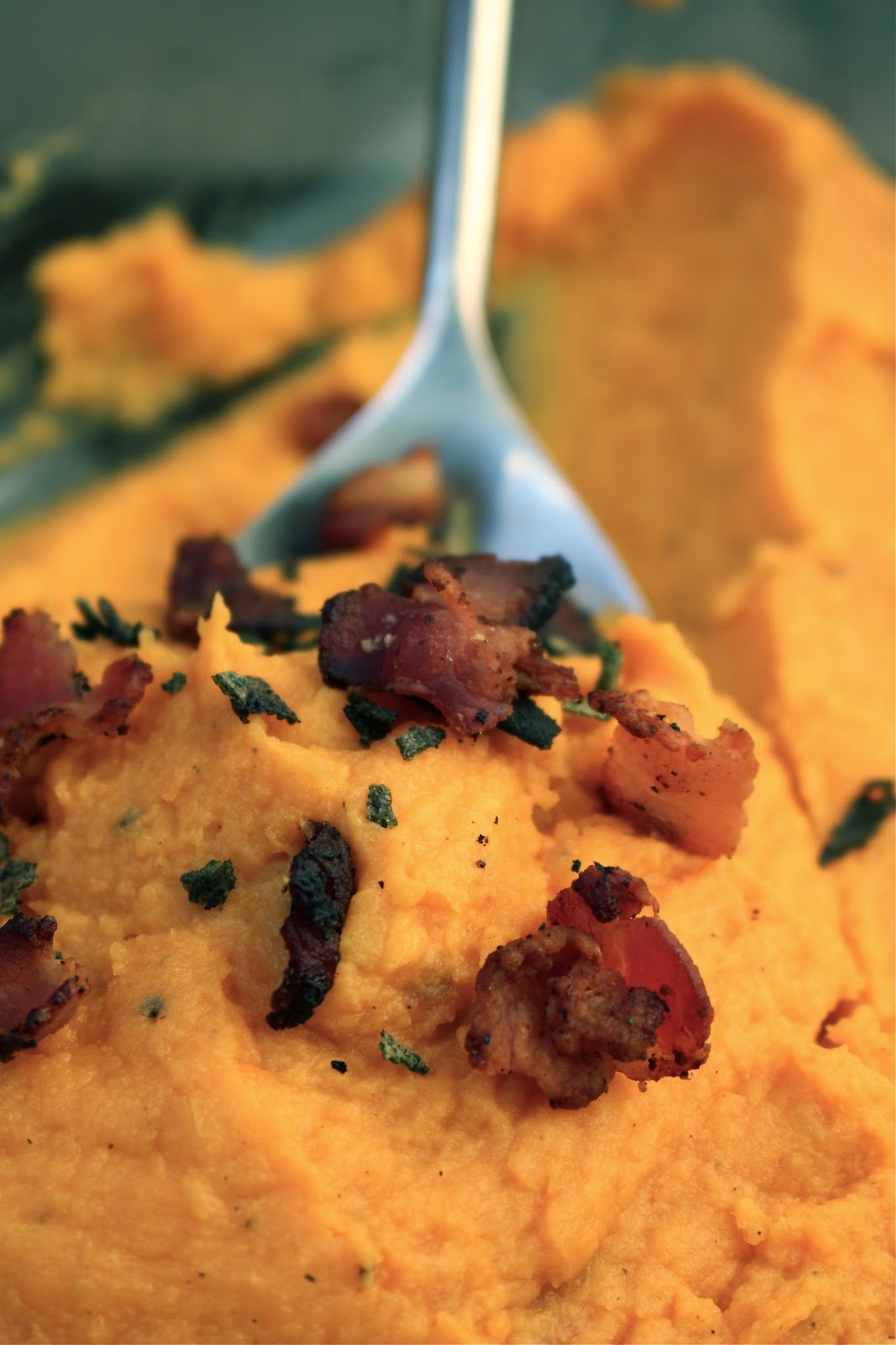 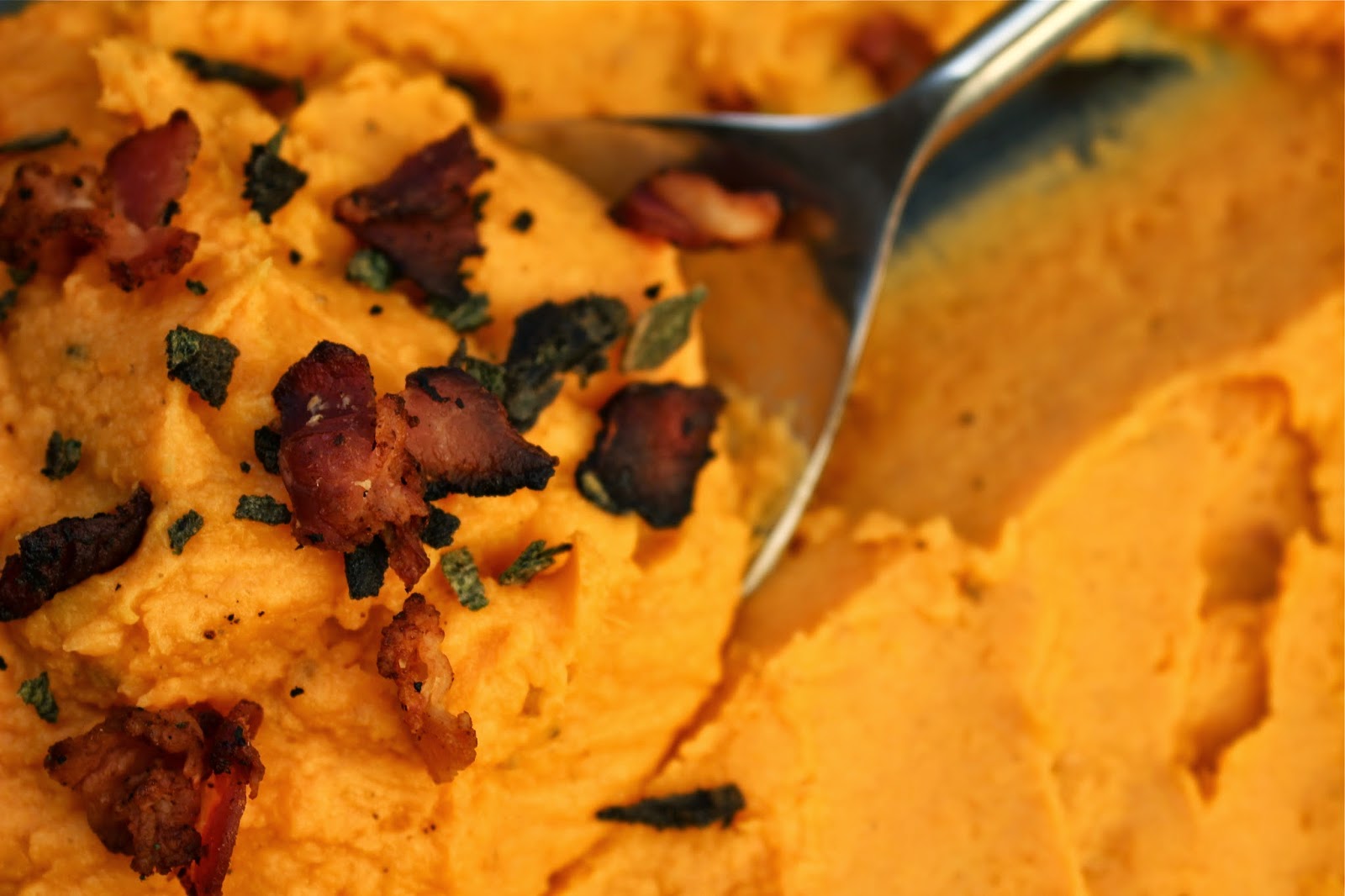 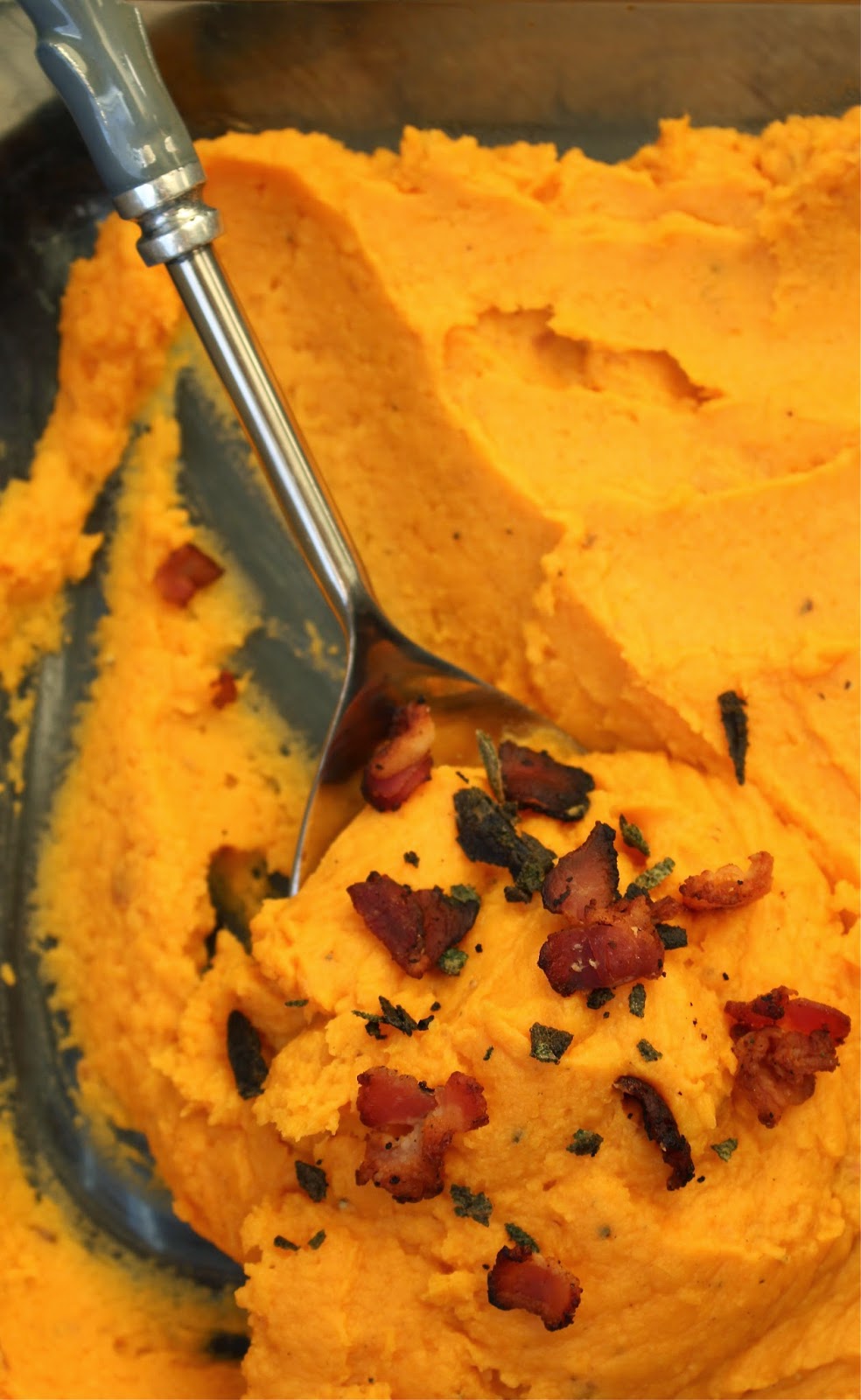 1 stick Unsalted Butter
8 ounces Semi
Sweet Chocolate
1 3/4 cup Flour
1/4 cup Unsweetened Cocoa Powder
1 teaspoon Baking Powder
1/2 teaspoon Salt
1/2 cup Brown Sugar
1/2 cup Granulated Sugar
4 Eggs
1 tablespoon Vanilla Extract
1 cup Mini Chocolate Chips
1/2 cup Pumpkin
4 ounces Cream Cheese (at room temperature)
1 teaspoon ground Cinnamon
1/4 teaspoon ground Nutmeg
1/4 teaspoon ground Ginger
Directions:
Preheat oven to 350 F. Grease 9 x 9 inch baking dish.
Cut two pieces of parchment long enough to fit up the sides of the baking
dish to use as handles to remove the brownies once cooled. Grease the
parchment.
Melt butter and chocolate in a medium glass bowl over a
double boiler. Set aside. In a large bowl, whisk together the flour, cocoa
powder, baking powder and salt. In a separate bowl, whisk together the sugars,
eggs and vanilla.  Stir in flour mixture just until combined. Fold in the
melted chocolate mixture. Gently fold in chocolate chips. In another bowl
whip together the pumpkin, cream cheese, cinnamon, nutmeg and ginger.
Pour mixture into the prepared baking dish using a spatula
to create an even layer. Dollop the pumpkin mixture in 4 to 6 places on the
brownie. Using a butter knife, carefully swirl the pumpkin mixture
throughout the chocolate brownie batter.
Bake for 40 to 45 minutes until a toothpick inserted comes
out dry.  Mine took about 50 minutes.  Cool for 15 minutes before removing from baking dish.
*Next time I might recommend using a bigger dish, perhaps 13x9in to make them a little thinner, they were incredibly rich and thick in the middle, but the outer edges were more dry and cake like. 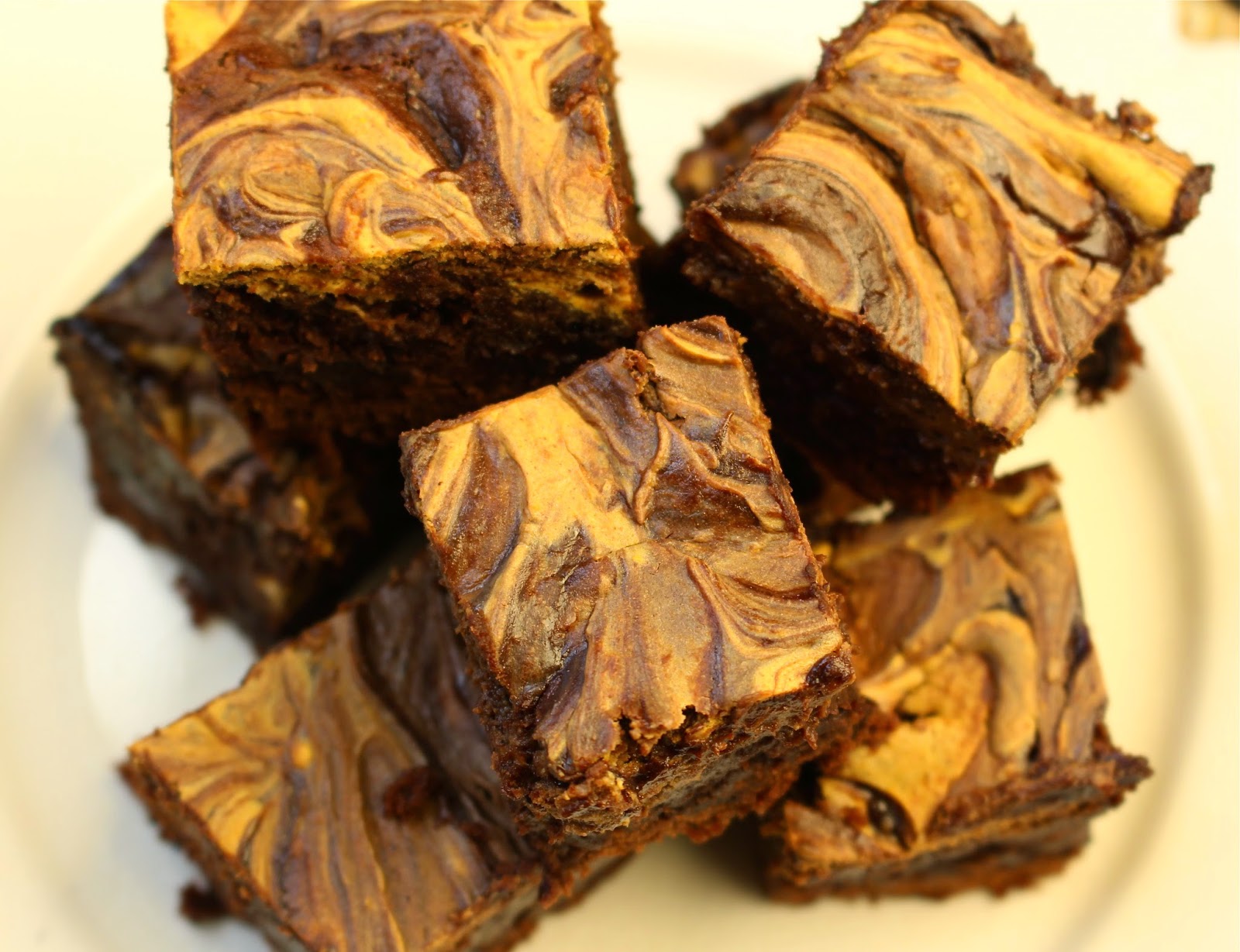 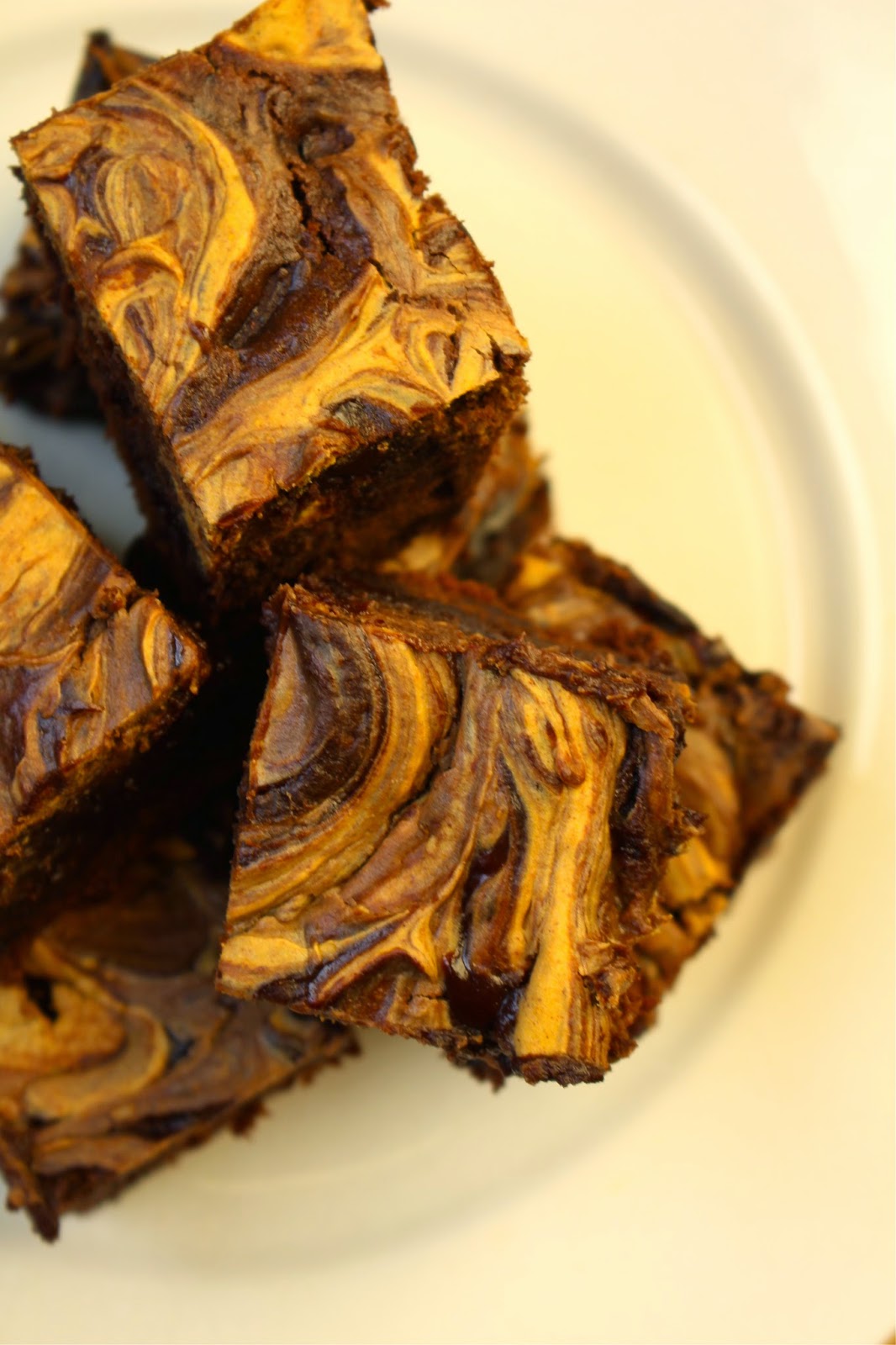 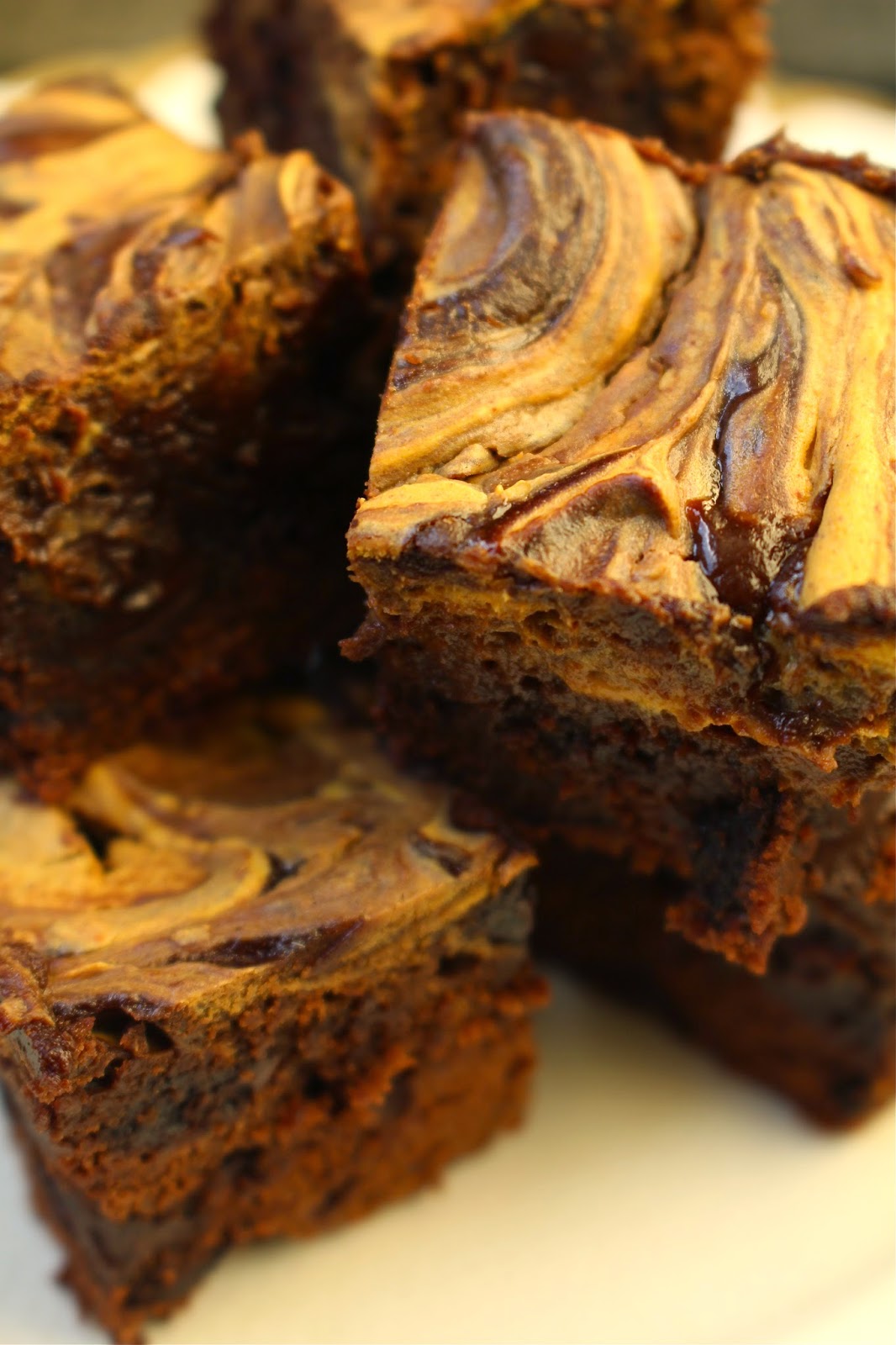